A painting of Polenov found 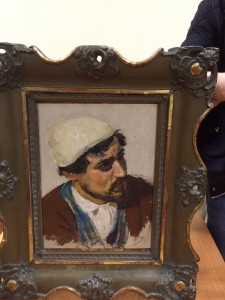 A recovered painting by Vassily Polenov

9th August 2015, two robbers were arrested in the region of Kaluga, Russia. They were located in Tarusa, less than 40
minutes away by river-bus from POLENOVO domain. Policemen found quite an astonishing loot: three pictures by masters. The sea near Capri Island, by Ivan Aivazovsky, a fifteenth century painting by an unknown Italian artist and, the third one, the Portrait of a Jew from Jerusalem by Vassily Polenov.

This picture was executed by Polenov in 1881–1882, during his last journey in the Middle-East. It represents a man wearing a kippa and a white shirt, a study for a larger biblical painting. These works of art were stolen from the art gallery of Tarusa. Two men, wearing balaclava and holding weapons, entered the gallery and took the paintings after having threatened the museum director. The robbery happened on the 9th of July 2015.

The two masterpieces of the Russian school are evaluated at 8 millions of rubles, that is to say 106 160 euros.

Vassily Polenov Association’s friends are very pleased about the happy ending of this story.