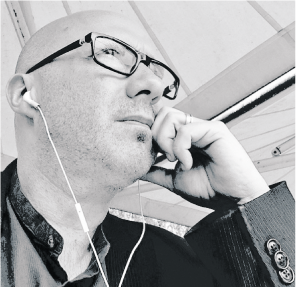 Author, composer, producer, arranger and pianist, he was born in Paris in 1964 and has been living in Belgium since 2009.

A self-made musician, he has worked extensively on soundtracks for Film and TV productions from a young age on, never losing sight of his main concern which was to keep a perpetually open mind while remaining essentially free and ruthlessly eclectic in his artistic choices.

This has led him to compose for various types of supports: TV, film, corporate video production, live events etc.

He has also produced and composed several music albums such as «Zartong» for the French-Armenian songstress Yerso (a sonic fresco honoring the victims of the 1915 Armenian genocide, which combines covers of traditional chants and original compositions). This album won 2 Armenian Music Awards (best modern contemporary album & best album cover), in November 2001 at the Glendale’s Alex Theatre (Los Angeles, U.S.A.).

It wasn’t until 2012, that he decided to resume this personal undertaking by elaborating the concept «Espaces-Temps-Ralentir» (Spaces – Time – Slowing down), an album which was recorded at Davout Studios between 2013 and 2015 with the Symphonifilm Orchestra directed by Steve Journey.

This singular album in which music and the spoken word are closely intertwined around an existential theme is also the starting point for a project called «Atom project».

During a double residency in POLENOVO in fall 2017, together with Stephane Troiscarres, Jacques-Emmanuel accomplished a project named “Ambulation / Déambulation”.