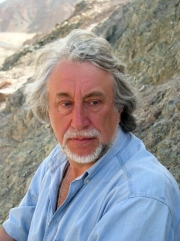 Yuri Kublanovsky was born in 1947. A man of many talents, he is above all a poet and a literary man. When he was a child, he greatly enjoyed painting and he even considered becoming a painter. He wrote his first poems when he was about 15 years-old and decided to devote himself to poetry. As a nonconformist poet, publicist, essayist and art critic, he wrote as a way to oppose Soviet values and principles. When he was a teenager, he joined the dissident poet group called “Bravery, Idea, Image, Freedom”.

Parallel to his writing activities, he worked as a guide in several Russian museums, in particular the museum on the Solovetsky Islands. The history of these islands made a profound impression on him, and he wrote three poems about them in the 1970’s.

Yuri Kublanovsky was never an official poet, which explains why he had to work as a church attendant. Moreover, he did not want his work to be had published in Soviet reviews, but his poems were published in Europe and the United States. In 1982 he was forced to emigrate in Paris, and in 1986 he settled in Munich. During this period, he travelled to the United States where he met the famous writer Alexandre Soljenitsyne. When he came back to Russia in 1990, he was very active in official literary circles. A few years later his talent was finally recognized: he received the Soljenitsyne Award in 2003 and Pushkin Award in 2006.