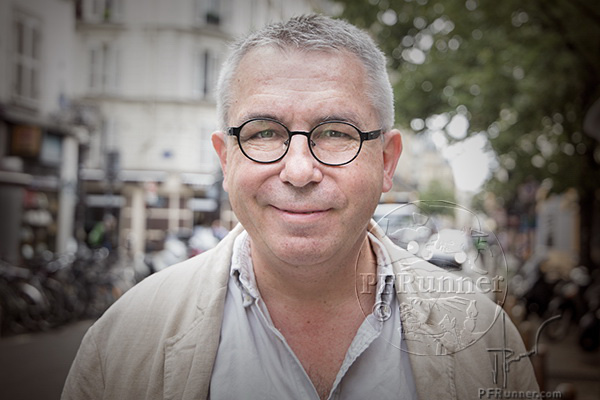 Artist, video artist. Trois Carres reflects on the nature of time and space. His work is both real experiments in physics and sci– fi.

Quotation: «Pictures are formulative process, amazing in its complexity»

During his studies at the National School of Decorative Arts, in the beginning of the 1980s, he founded the Les Frères Ripoulin group, together with Jean Faucheur, OX [archive], Bla + Bla + Bla, PiroKao (Pierre Huyghes), Manhu, Closki, Louis Jean Gorrie  – they all were united by Nina Childress. At that time he worked with the photographer Denis Chapoulier. Working with the group on the first floor in the 33, St. Antoine st, the Nova Actuel style building, he collaborated with Keith Haring in Paris, participated in two exhibitions of the group at Agnes b. in Paris, and at Tony Shafrazi gallery, in New York. The group collapsed in 1989, Trois Carres continued to work as an independent artist.

He used painting to develop intuitive mathematics, he introduced the idea that picturesque surfaces are sets of numbers.

His work on matching colors and numbers brought him to video art as an additional system of space-time structure.

The process was similar to the conceptual moves, that reveal other ways of knowing the world. Playing with time and space, as if it were a sci-fi story, Trois Carres developed the aesthetics of multiple worlds in his N + 1 installation, which was created in five stages in France. Currently, he continues to explore the possibilities of multiple worlds, working on the concept of painting as an intermediate product.

During a double residency in POLENOVO in fall 2017, together with Jacques-Emmanuel Rousselon, Stephane Troiscarres accomplished a project named “Ambulation / Déambulation”.