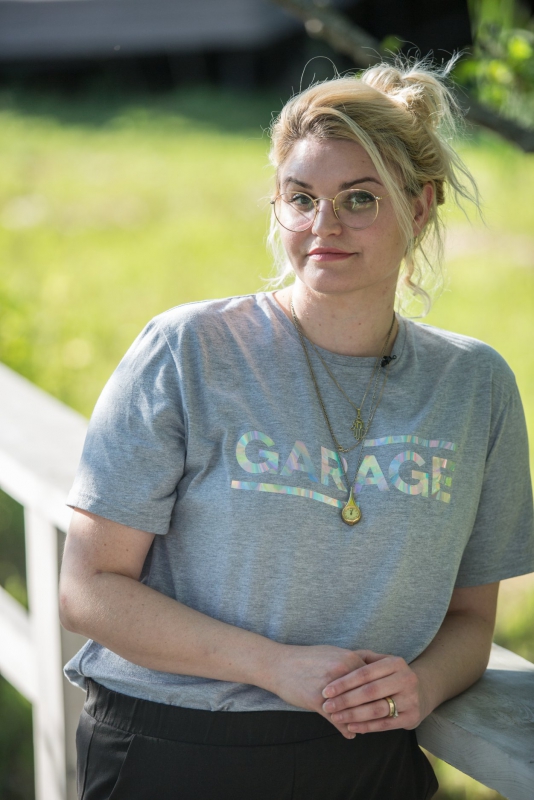 Elinor Sahm holds a BFA from Bezalel Academy (2013) and is a graduate of Bezalel’s exchange program with the UDK, Berlin (2012).
Sahm had exhibited her work in galleries, art fairs and contemporary art festivals in Tel-Aviv, Jerusalem, New-York, Russia and Brazil.
Her work methods and material vary with the concept of the work, which is mostly composed of a site-specific oriented thought.
Sahm’s works are a part of the Polenov museum collection and in private collections.

Polenov built his house on the banks of the Oka-river for his family to be rooted there and to give a cultural home for the people surrounding the estate. To those which a museum in Moscow or Tula is not something, they can reach easily. With this thought in mind, Elinor Sahm and Natalya Polenova, the museum’s director and Polenov’s great-granddaughter, had decided on making the installation of Lumos Bulbous a
yearly tradition. Every September 8th, the Polenov family’s ‘Saint Natalya’s day, shall become a public art event for the community.
This action is a homage to Polenov and his life’s work surrounding the Polenov estate and museum So that his home will once again make the tradition of a private family into a public spiritual and cultural property. ‘Lumos Bulbous’ – a site-specific installation made of metal rods, alcohol ink on synthetic paper and LED lights.

‘Lumos’ is a magical term borrowed from the light-giving spell of the Harry Potter books by J.K Rowlings. When joining it together with the botanical term ‘Bulbous’ (derives from ‘bulb’), memory storage units which rebloom yearly, we receive a new variant to the familiar ‘Light
Bulb.’ Four elements described in the objects through the filter of Sahm’s stay at Polenovo. The “bulbs” shaped as street lanterns are lit from within, illuminating the ink paintings and multiple metal roots “growing” around them, a reminder of another connection to artists of the family – Vassily Polenov and his magical light Diorama and Elena Polenova’s illustrated lanterns. In addition to the installation, Sahm had written and performed with the ‘Polenov Haggadah.’ A text made to be a part of the installation’s ritual every September 8th. It is the story of the four elements of Polenovo told in the rhythm and pace of the ‘Four Sons’ of the Torah, a text recited every year during the Passover Seder.
Of late, Elinor Sahm’s work had been focusing on the effect of the ritual from a folkloristic perspective. Her work at Polenovo was a combination of her understanding of the Polenov family through the analysis of her family heritage from both Germany and Israel.