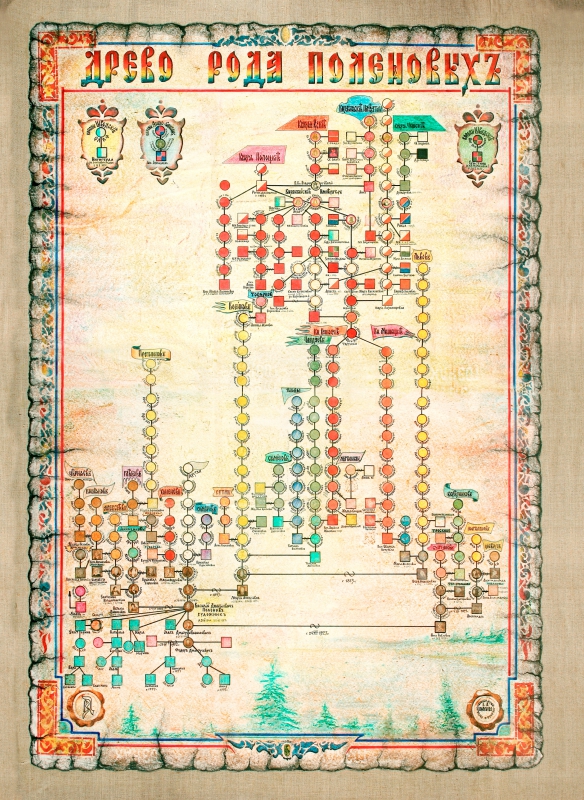 Vassily Polenov was part of the progressive Russian intelligentsia of his time. All his life was dedicated to Art, Beauty and Education. Faithful to democratic traditions, Polenov practiced a selfless, accessible and understandable Art for the masses. The whole family was part of the Enlightenment tradition.

The artist’s maternal grandfather – Nikolai Lvov – was a highly educated man with many interests. He was a talented architect, writer, musician and collector of crafts and folklore pieces. This man had taken part in the circle of young creators revolving around the poet Garvila Derjavine. “He is full of intelligence and knowledge, he loved science and the arts while having developed a subtle and sublime taste. People have often solicited him on subjects relating to literature and art.” Wrote the poet on his friend.

The artist’s maternal grandmother, Vera, was very sensitive to the interests and needs of the children. She knew a lot about poetry, folk tales and history of the beginning of the XIXth century. Vera spent time sharing her knowledge to the Polenov children, including Vasily and his sister Elena, who became a talented watercolorist. Vera played a great influence on the children’s hobbies and also on their artistic training.

The paternal grandfather, Alexei Polenov, had an important role in the history of progressive thought of the eighteenth century in Russia and was nicknamed “the first Russian emancipator”. This lawyer, had written an academic thesis on the abolition of serfdom and ardently defended the importance of universal literacy in Russia.

The artist’s father, Dmitry Polenov, was a famous archaeologist and bibliographer. As a young man, he worked as secretary of the Russian Embassy in Greece. Profoundly interested in Hellenic culture, he was able to instill in his son that love and enthusiasm for the art and architecture of ancient Greece.

The artist’s mother, Maria Polenova, was a portrait painter and had also written a children’s book in which she had described a family living with good morals and varied knowledge. Later, Vassily Polenov will admit that he inherited from his mother the passionate love for painting. The educational traditions of the family have also had a profound and beneficial influence on the artist’s career.