Surrounded by art from a very young age

Vasily Dmitrievitch Polenov was born on May 20,1844 in Saint-Petersburg. His family placed great emphasis on the importance of art and culture. Indeed his father, Dmitri Vassilievitch Polenov (1806-1872) was a connoisseur of the artistic world, and his mother, Maria Alexeievna Voeïkova (1816-1895) a gifted portraitist of the Brullov school.

He spent his childhood in Saint-Petersburg, a major cultural center, and Carely, in the Olonentsky countryside.

Like his ancestors, Vasily Dmitrievitch studied law at the University of Saint-Petersburg, yet he dreamt of becoming a painter. He decided to take courses at the Academy of Painting (1863-1871). While he was studying at the Academy, he was able to travel in Western Europe (Germany, Italy, Greece, France). He had a studio in Montmartre, an important center for Parisian art, and sought inspiration in Normandy. In 1871 he received the Academy’s Gold Medal for his painting The Resurrection of Jaïre’s daughter.

Vasily Dmitrievitch founded the school of Russian realistic landscape painting. Starting in 1879, each year he took part in the annual exhibits of the Wanderers Society (1870-1923). In 1926 he was given the title  “Artist of the Republic”.

A humanist devoted to cultural development for all people

In the 1860’s, avant-garde thinkers fought oppression and wished to improve the general level of instruction. Their humanitarian ideals made a deep impression on Vasily Dmitrievitch, an adolescent at the time, and stayed with him all his life. In 1915, for instance, they prompted him to create a center for teaching the dramatics art in Moscow.

In 1882 he married Natalya Vassilievna Iakountchikova, with whom he had five children. They moved to the Tula countryside, which became their new family center and home. Natalya Vassilievna helped her husband transform his ideals into concrete projects. Togeher they founded two schools – in Bekhovo and Strakhovo – as well as an amateur theatre circle.  Vasily Dmitrievitch considered theatre to be one the best ways to bring culture to the people.

Vasily Dmitrievitch died on July 18, 1927, leaving behind him a rich artistic and cultural legacy. His artistic testament reflects his conception of art. In May 1906, he wrote « A man lives on through his creations ». He was buried in Bekhovo.

After the artist’s death, the estate of Borok was renamed Polenovo to commemorate his name. 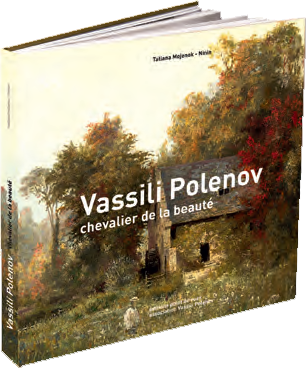