Benjamin Lamblin is studying at the Louvre School (Paris) and is doing an intership in the POLENOVO museum while he takes the initiative to show off a part of the natural reserve by putting in a large installation named « The forest flows through the forest ». Inspired by Land art and with minimalist materials, branches and leaves, Benjamin Lamblin enhances the birch – the tree which reminds him most of Russia  – by using it as his main material. In this way, he pays tribute to nature, the same that painted Vassily Polenov. His project’s first thought did not have the same proportions as his final work : it started from the shaping with flowers – for his own amusement – of Vassily Polenov’s monogram, with the will of creating a prototype workshop for visitors in the natural reserve, as this part of the domain is not used that much for these activities. Enventually, the project is realized all alone, without the museum staff being aware of it. The installation spreads out in the forest, and takes another turn to become aesthetic, picturesque and poetic more than conceptual or participatory.

From the 21th of August to the 7th of September 2019, Benjamin Lamblin spends one hour thirty to three hours per day, to arrange lenghts of dead wood in order to create a winding path on several meters between the trees. At one of the ends, long branches are put together to give form to two conical structures. These two huts evoke a camp, completed by a light structure of leaves and a campfire made of twigs and logs.

Firstly conceived to be seen from one specific point of view, the installation becomes more immersive. A long white strip of birch branches goes back and forth through the wood and evolves as a waterway or a root whose tip frays and disappears. This way is the backbone from which several parts of the wood are completed and highlighted. The whole intallation aims to accentuate the picturesque aspect of the forest. Its onramental characteritic is based on birch’s verticality, composed of a thin trunk and free of low branches, which creates a constrast with the sinuous, horizontal path. The latter snakes as a stream and adds this watery detail to the forest to make it appear more bucolic. Light and wind fill with life the leaves curtain which ends the path.

The anthropogenic part flanked with the two huts is equivocal and could be interpreted both as an encampment, or a sanctuary. Besides its aesthetic aspect, this place is voluntarily more spiritual and composes an ode to nature. It thus reminds us Vassily Polenov’s motivation to settle in the coutryside, near Tarusa: to appreciate russian landscape. In the middle of this temple the hearth of black twigs crowned with white logs represents a solar eclipse, symbol of forces of nature. Funnily, when the employees first discovered the installation, it left them puzzled to the point of being able to think that a sect had done a ritual dedicated to solstice.

The installation integrates a process of creation partly described in a logbook written by Benjamin Lamblin, and which evolves in time. If its setting-up takes several days, after that and due to materials, it degrades in a short time as autumn approaches. The leaves curtain quickly disintegrates, branches rot, dead leaves cover the stream and mushrooms appear. This fragility creates an ephemeral work which remains in our memory thanks to photographs only. 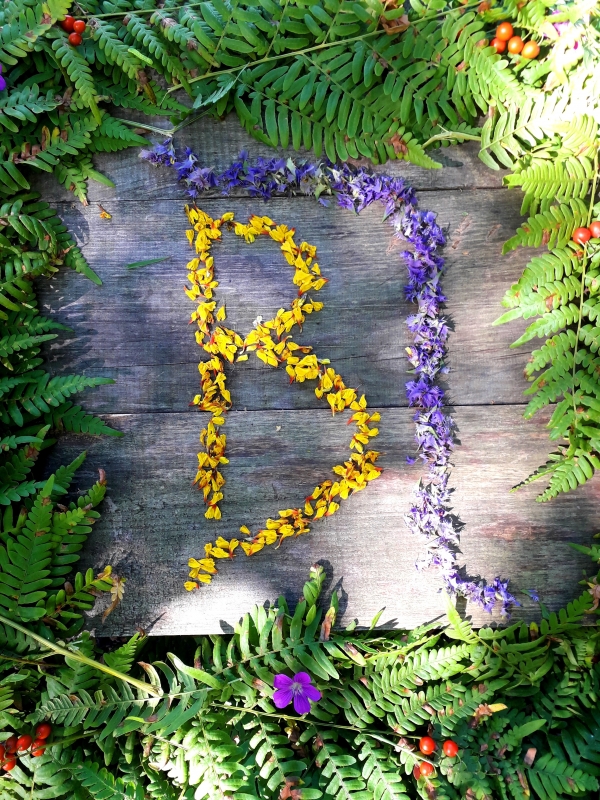 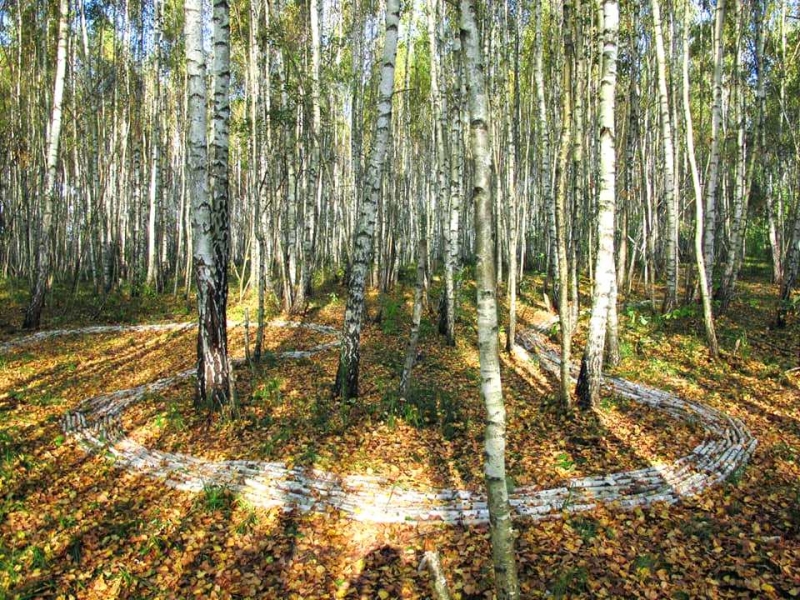 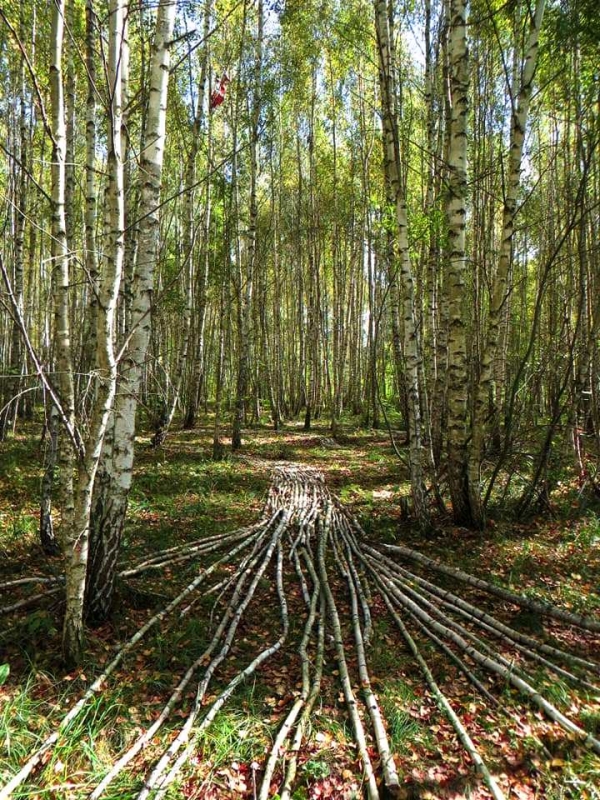 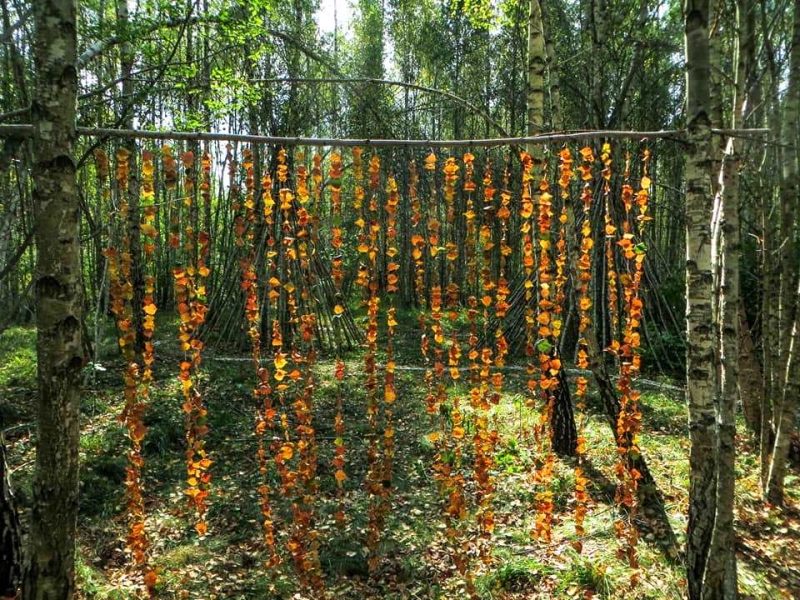 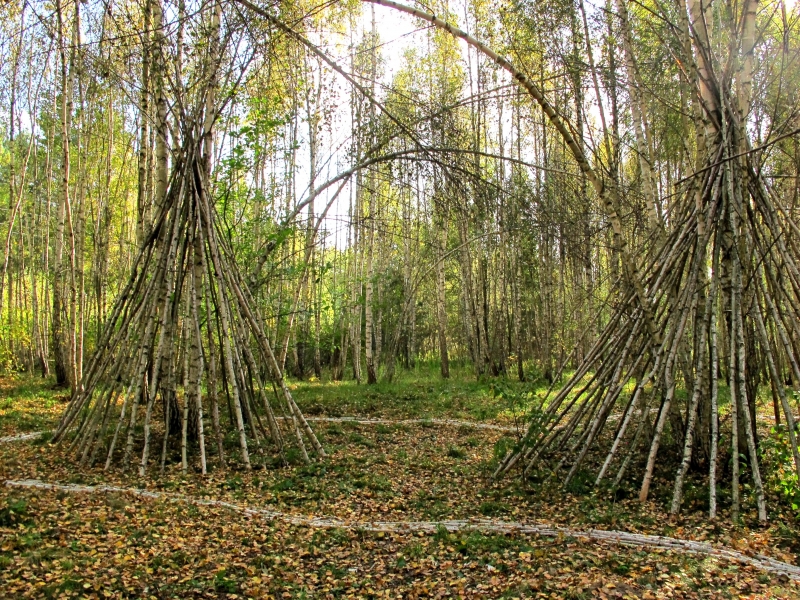 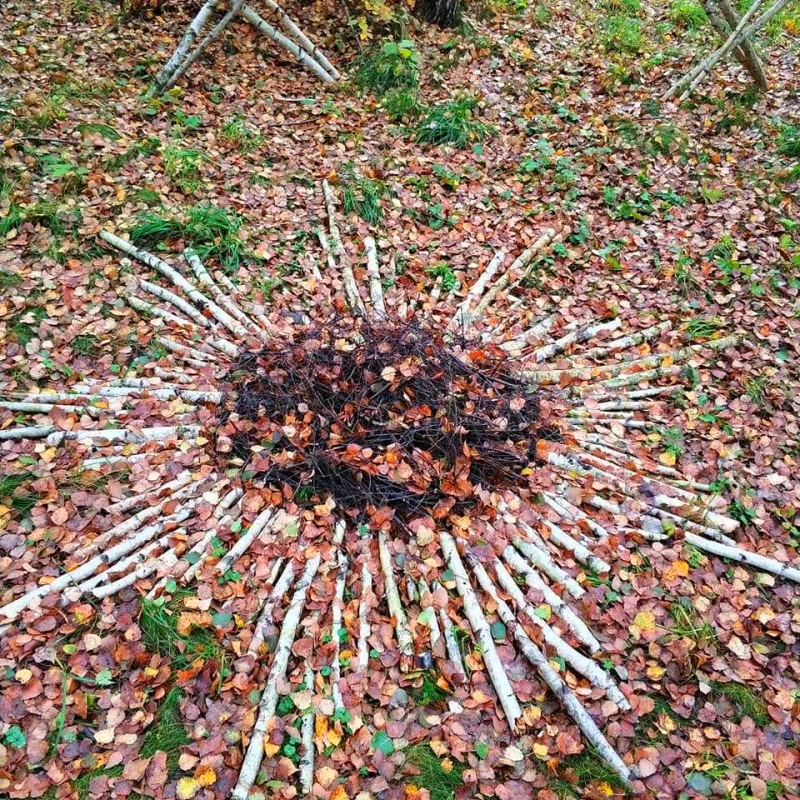 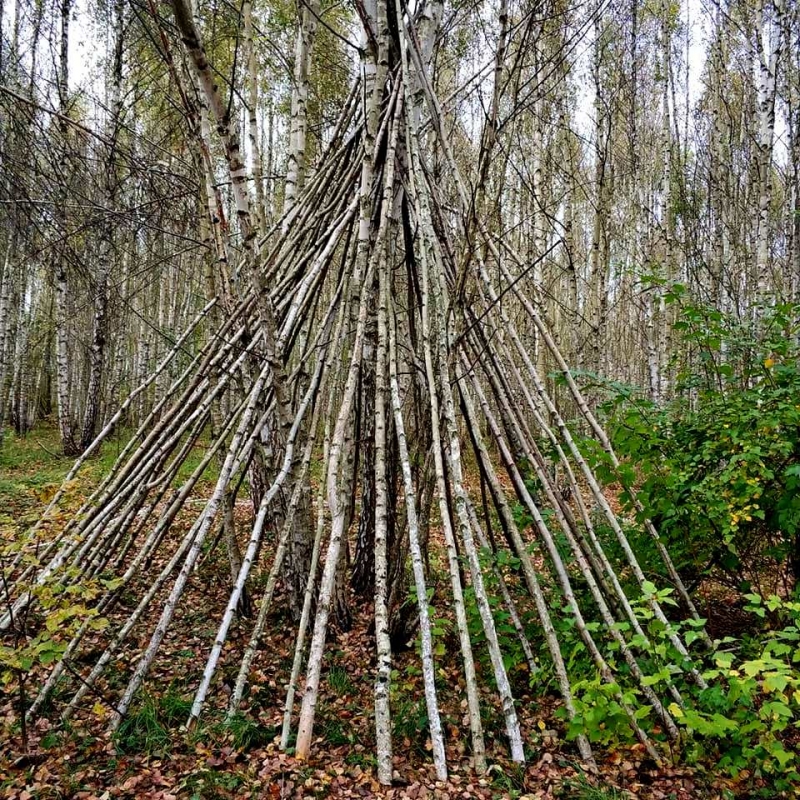 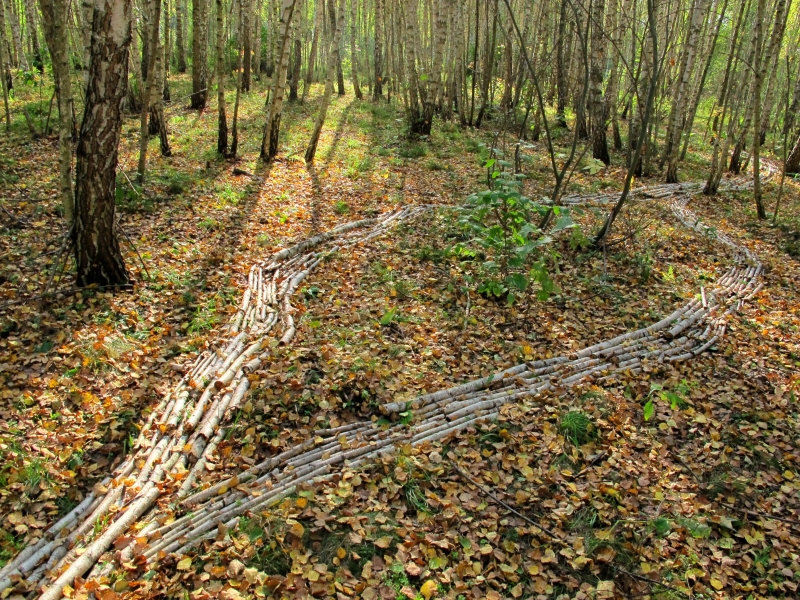 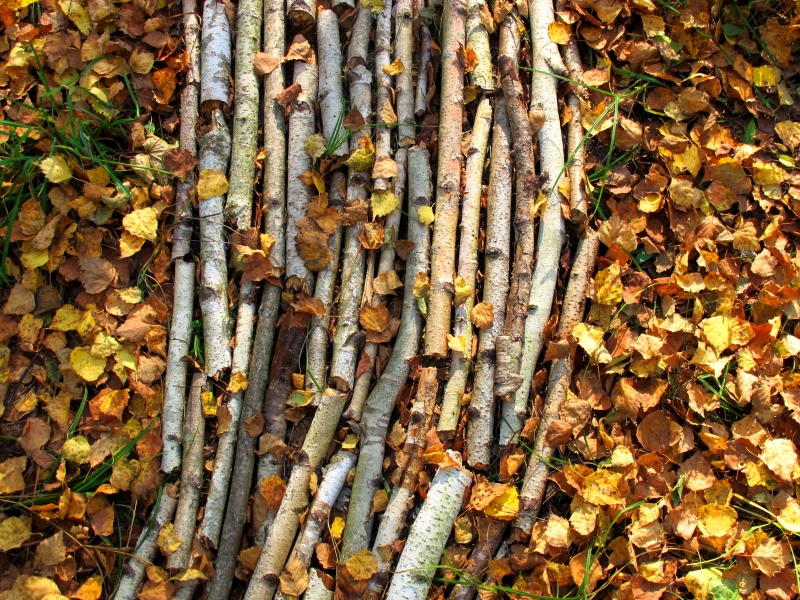 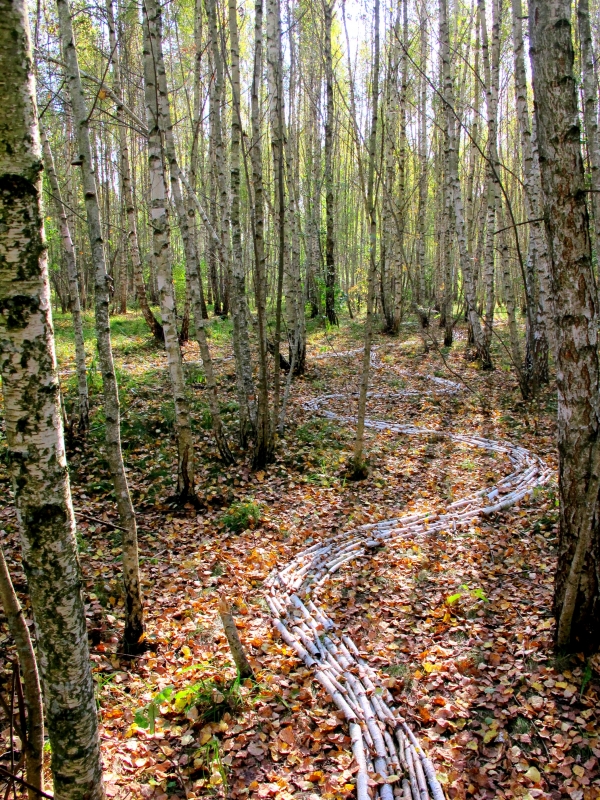 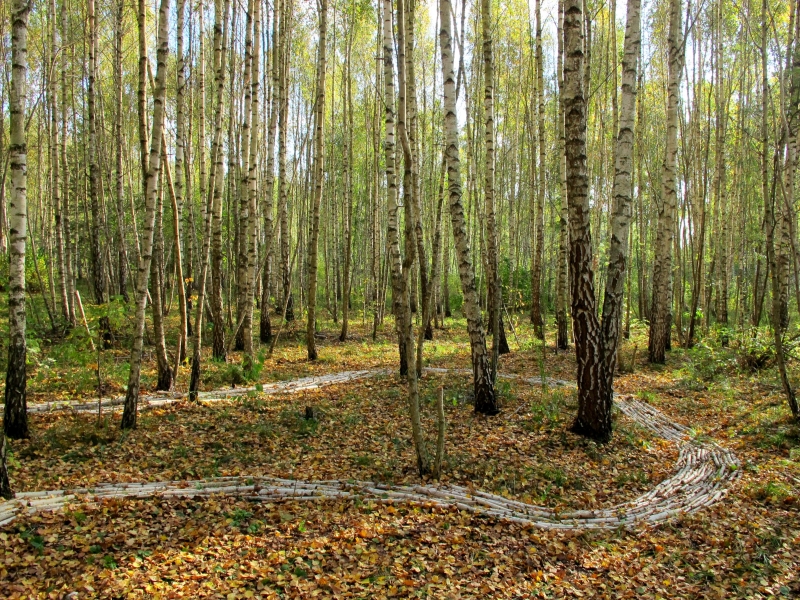 Some excerpts extracted from Benjamin Lamblin’s logbook (written in Spanish, translated into English by the author:

August 21th, 2019:
[…] I wanted to create something on my own. I had just seen a documentary about the birth of Land Art in the United States during the sixties and was kind of amazed by their work even knowing them already. I also felt like giving shape to my feelings and ideas. However, I didn’t pretend to work on deep conceptual thoughts like they did. My goal was to create something beautiful for the eyes. I started to wander around the estate to find a spot and things to put together. It didn’t really work out at first. Later on the same day, I went to the birch forest near the Gorod Masterov, a beautiful place out of the main paths of the park. The whole wood is filled with the white vertical lines of the birches and the lighting is great, especially during the sunset. I knew I could work there without anyone knowing. I then gathered pieces of dead wood – there were so many of them – and started to draw a circle with them. I quickly realised the circle had to become something bigger, so instead of closing it, I extended it in order to create a stream of white wood which was flowing across the
birches. I felt like this stream was completing the small landscape. The water is such an important part of the Russian nature so it came as a reminder and also helped breaking the monotony of the vertical white lines. The little gaps between each of the wooden pieces actually recreate the rhythm of a flowing stream – even if time-frozen. It is a skeleton, a print, a memory of what was and isn’t anymore. […] I was very excited thinking about the next steps of the work. I had many ideas coming through but I also knew they were most likely to change a couple of times before actually becoming real.

August 22th, 2019:
At that point, I had defined a point of view from which the whole creation had to be seen: it was thought as a theatre set or as a painting. It was much easier to start this way rather than using the stream as a road to different points of interest. But I need to create a few anyway. I was considering some options of sculptures: altar, egg … We will see as it goes. I kept on collecting wood for the stream anyway, using thick trunks for the back part in order to a consistent visual effect in a limited amount of time. During the evening, I looked for works using wood to draw inside forests and I found a project of the year 1995, made by the Danish artist Mikael Hansen: Organic Highway. Mine is very similar, except the scale is much smaller.

August 23th, 2019:
It was clear that I had to work faster because the forest was not on my side. The summer was ending and the leaves were already falling one by one, slowly covering the stream and cleaning them off would take too much time. […]

August 24th, 2019:
I tried to create a half sphere with wood pieces but it definitely failed. It ended up being a flat circle. It was almost a campfire which would have been left by a tribe. I myself left it and might come later to make a new stuff out of it: for example a circle pattern that could repeat itself along the stream. […] While I was gathering more and more wood, I discovered a great spot that was just aside my construction. There are three bending birches that create beautiful arcs. The space could be converted into a more impacting theatre set than my first one. I thought about curtains made out of leaves to decorate the birches but it might be tricky in terms of material (thread) and installation. Maybe I would be able to set the curtains on other birches near the bending ones. Then I had to extend the stream to connect it to this newly discovered area. The gap was still quite big and therefore variations would be necessary to avoid monotony on the stream. […] During the afternoon, I gathered leaves around the Gorod Masterov so I could start making the curtains in my room.

August 26th, 2019:
I was still crafting the curtains in my room and I also visited the birch forest to see again how to set them. Unfortunately, I broke the branch I chose as the main support. Then I found another spot but the gap between the two birches was bigger: we will need more curtains, maybe thirty.

August 27th, 2019:
My project for the new theatre set was now going toward a shamanic sanctuary. I wanted to close it with very long trunks (whole trees that fell down, there were many) put on the birches, continue the stream inside the temple and an eclipse symbol in the middle.

August 28th, 2019:
I did thirty curtains and I set one in the sanctuary to see if it resists. I will see that when I return from Moscow.

August 31th, 2019:
I hadn’t been there for a few days and the wood was becoming more and more beautiful thanks to the falling leaves. I was very happy to see that the lone curtain of leaves resisted during my absence. I will be able to install them sooner than expected. Using very long trunks, I created a giant grid/fence around the sanctuary – actually on one side. The diagonals create a lot of confusion with the vertical lines of the trees and I hope it will bring the attention to the door and its curtains of leaves that will take place in the middle. To close the other side of the temple, I will build two big tipi around two different birches also using huge trunks gathered here and there. These two structures will define the rotation of the stream later.

September 1st, 2019:
It was now clear that the whole project was no more a theatre set but a tiny landscape that could be explored wandering around.

September 2nd, 2019:
I drew the lines of the new part of the stream, they are pretty much organic.

September 4 th , 2019:
The thirty curtains of leaves have been set up. I could tell it was going be extremely ephemery since the wind was quickly knotting them all together. The very first part of the stream was shaped as a delta of a river and also as converging roots, with big and irregular pieces of wood. It was a good way to give a start to the whole path created by the stream.

September 6 th , 2019:
The very last touch was the creation of the eclipse symbol before the door of the sanctuary mixing thick white wood and tiny dark branches. It represents the forces of Nature – the ones that are celebrated inside this temple.